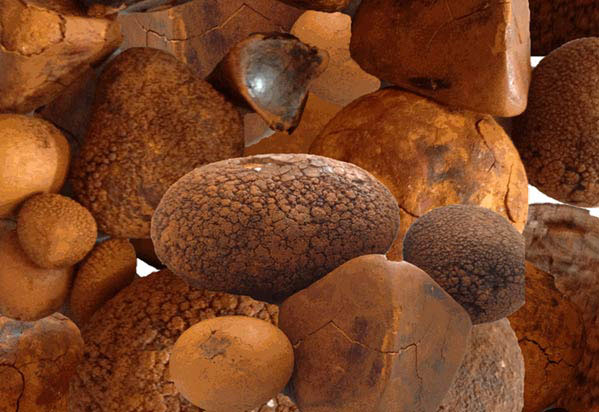 To some, a bezoar may be some mythological property only used in wizarding potions. For others, they’re nothing more than a nuisance that should be disposed of immediately.

However, to a certain market in Asia, bezoars, or ox or cow gallstones, as they are also called, they’re worth more than gold.

Gallstones, as the name suggests, form in the gallbladder of the Cow or Ox or Bison. 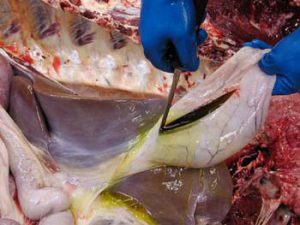 Gallstones are usually round, triangular, or square in shape, vary in size and are usually a yellowish-red to brown-orange in color. 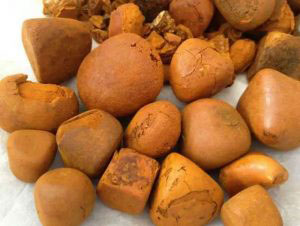 Bezoars also have a long history of being used in Chinese medicine as well as in other medicines around the world.

The History of the Bezoar

Ox gallstones, or bezoars, were first discovered in the writings of Shen Nong’s Herbal Classic.

This was written in the Qin and Western Han Dynasties, which dates its use from anywhere from 206 BCE to 221 BCE. They weren’t just used in China culture, however.

Those who lived in the Andes Mountains were using gallstones and bezoars before Europeans arrived there.

The Persians and Greeks used the gallstones to cure poison, in the first century AD. Greek medicine also suggested that one wear the bezoar in a pendant or ring to invoke the stone’s magical properties.

Some even claimed they could make a man virile and improve a woman’s fertility.

Gallstones are mentioned in the eighth century AD in Arabia by Serapion who was the court physician to Caliph Harun al-Rashid. He claimed that gallstones could cure poison of snake bites and scorpion stings.

The stones were used for jewelry and charms, especially in and after the 12th century, when they were brought to Europe by Crusaders.

Elizabeth the First was among those who desired bezoar jewelry, having one set inside of a silver ring.

In the 1400s, after Vasco de Gama traveled to Calicut, India, the Portuguese explorer opened trade with the native people.

One of the exotic goods they purchased were bezoars, which they believed protected knights and nobles from poison and evils they’d encounter in their life.

Garcia de Orta, also Portuguese, reported that all wealthy Indians used bezoars in rose water after purging every morning for five days straight in the specific months of March and September in order to maintain their youth.

He also believed that the bezoar could protect against and cure the plague.

During the 17th century in Europe, the fanfare around bezoars died out. Surgeons and doctors stopped using them to treat illness, especially after Ambrose Pare, a surgeon, tested the authenticity of the bezoar’s claim to be able to cure poison by feeding the bezoar to a criminal who had been poisoned.

The criminal, unsurprisingly, was not cured and quickly died, albeit painfully.

Bezoars were considered to be effective, especially in treating childhood diseases such as infant convulsions. They were also used with other herbal medicines.

This drug was used to treat the heat involving pericardium and heat of phlegm which was stagnating the heart. Symptoms of this condition included: high fever, coma, delirium, and a yellow tongue.

Ancient Chinese scholars were able to tell true ox gallstones from fake ones by simply rubbing their finger across the surface of the stone.

If the yellow color was not easily removed from their stained finger, then the stone was true. This tradition of using ox gallstones to treat illness holds true even today in China.

You may wonder just what an ox gallstone can be used for today in the new world of high-tech medicine. Traditions are hard to be rid of, and so, gallstones are still used–and sworn by–to treat some of the following conditions.

The bezoar reportedly clears the heart, rejuvenates one’s spirit, removes phlegm, delirium, or a coma. It also clears the liver and removes toxicity and puts a stop to tremors and convulsions.

It is said to heal a red and swollen throat and cure boils, sores or carbuncles as well.

In children, it is especially used to treat convulsions in addition to wheezing, vomiting, diarrhea, mucus, fever, unconsciousness, seizures or epilepsy, meningitis, measles, and gastroenteritis.

The bezoar is usually taken in pill form and is not recommended for women who are pregnant.

When mixed with water buffalo horn or rhinoceros horn, the treatment is said to cure encephalitis, meningitis, and even Legionnaire’s condition.

When it is put together with musk, frankincense, and myrrh, it is said to treat breast cancer, buboes, subcutaneous nodules, abscesses, scrofula and malignant sores.

So, what could the bezoar actually be doing to be able to see this effects? Bile that has high concentrations of hydrophobic bile acids act as powerful detergents.

These can kill pathogenic organisms through the cell membrane. They act as softening, soothing, cleansing and antiseptic treatments.

Since ox bile has high levels of vitamins A, D, E and K, those who had deficiencies of any or all of these vitamins could receive them through the pill.

Deficiencies in these vitamins have been known to lead to night blindness, infertility, childhood rickets, hemorraghic diathesis, and osteopenia.

So, by receiving the vitamins through the gallstone, they were able to remove those deficiencies, and thus lose the symptoms of the disease.

Bezoars have also been proven to inhibit, or stop, bacteria and microbial growth. This has given them anti-inflammatory, sedative, hypnotic, anticonvulsant, antispasmodic, analgesic, and antiallergic benefits.

Since gallstones contain rare metals such as magnesium, zinc, copper, selenium, calcium, and iron, they can also promote metabolic stimulation. Essentially, they can kickstart your metabolism into working effectively.

Also, melatonin is one of the hormones secreted by the liver within the bezoar. Melatonin not only works well as a sedative, but it also aids in protecting lipids, nuclear DNA and other molecules from damage caused by oxidation.

This keeps organs protected from dysfunction.

Recently, it was discovered that bile also effects the activation of certain nuclear receptors and signaling pathways in liver cells as well as within the gastrointestinal tract.

This means that they could potentially lend a hand in kick-starting certain gene expression, which could lead to a stimulus of the immune system or other pathways that could fight off disease.

Because of bile’s relationship with NADPH oxidase, it can even help in defending against a pathogenic attack by stimulating reactive oxygen molecules.

Ox gallstones contain something known as calcium bilirubinate. This molecule, when unconjugated and pure, can have antipyretic, anticonvulsive, bacterial growth inhibition, and antihypertensive effects on the heart. Thus, it has been used for over 2,500 years in China. Even today!

More recently, ox bile components have been used to treat steatorrhea in patients with Crohn’s disease after ileectomy.

So, a practice with a history spanning several thousands of years has found to be beneficial, at least in part, still today even with our high-tech medicine at the forefront.

Of course, you should always exercise caution when using herbal medicine.

Before you hurry to the local market, there are certain warnings to keep in mind. As with all things, too much can hurt.

Overdosing on bezoars can poison as well as increase gastrointestinal motility. You can also experience convulsions, suffer from diarrhea, and have an increase in skeletal muscle activity.

The effects of bezoar might also inhibit certain pathways that promote blood flow and generation. So, blood pressure can drop, red blood cells can decrease along with hemoglobin.

This can lead to cardiac arrhythmia, semicoma or even a coma, and eventually death due to respiratory and circulatory failure. As with anything medicinal, use caution if you intend to try it.

Do your research and perhaps even speak with your doctor or a natural medicine expert to ensure that it is safe for you to attempt such a treatment.

When looking at the yellowy-orange surface of an ox gallstone, you might not think much of it. It may even look rather gross to you. However, in Asian markets, what you’re looking at could very well be worth more than gold.

Although the market varies, gallstones can sometimes sell for $15,000- $35,000 a kilo. Keep in mind, of course, that you need several gallstones to make up a kilo, and even then, depending on the market, you may not receive the topmost price.

There was even, reportedly, a man who was stealing gallstones and selling them to the market on his own. He was, eventually, caught and arrested, but for six months, he stole bezoars and sold them to the Asian market for a nice profit.

Measures must be taken as well in order to preserve the gallstone for sale. First, if you’re looking for a possible specimen that you believe might have some gallstones, examine their hooves.

Cows and bovine with yellowing hooves are more likely to have gallstones than cows that otherwise appear healthy. So, please don’t slaughter cows and bovine unnecessarily. Save yourself some money and time by examining their hooves first.

Once you have found a gallstone, you need to work quickly to preserve it. Gallstones are valued based on color, texture, and size. Since they are 60%-75% moisture, you need to dry them first.

Make sure you do not do it in the light, however, because gallstones are photosensitive. This means that should they be exposed to light, they could become damaged. We all know that damaged goods sell for less.

Since they are also like a sponge, they need to be turned over consistently to keep the moisture from collecting at the bottom. Drying can take up to six to eight weeks. If they have become moldy, then they won’t be accepted in the market.

If you do sell them, how much can you expect to make? Well, in Denmark, they recently sold 101 grams of gallstones to the Asian market and was paid 43,000 DKK. That equates to over $7,000.

A quick look at an import-export website gives a general idea of the current market for gallstones. Some are selling for around $44 per gram. This could be lucrative if one has enough grams. Others were selling for $10 a gram.

You should keep in mind also that buyers usually like to purchase at least 50 grams at a time. There may be others who will buy more or less, but 50 grams seems to be the standard.

You can’t expect a big payday in the slightest, however, if your stones aren’t quality.

Besides gram-count, they’ll be expertly examined to ensure that the gallstones are high quality and marketable for those buying them for their herbal practices.

If you’re one of the lucky individuals who just so happens to have bezoars just laying around, or if you are interested in potentially pursuing the hunt for these highly desired products, Cheong Hing Trading Co Ox Gallstones buyer is eager to purchase them from you.

Our company has been in the market of cow gallstones for more than 30 years. We will buy any quantity at any time and will pay you at market or international price.

Since we’re located in Hongkong, we are in the heat of the bustling market. Which means that we know the perfect ebb and flow of the market and can give you the best price for your stones.

Please contact us now and begin raking in just a bit more money that you didn’t even think you could make before.

Scroll back to top